Transcriptions of more than 10.000 pages of High Court of Admiralty, London

One of the trials is about ships from Hamburg:

Three large ships (The Salvador, the Sampson and the Saint George), of supposed Lubeck and Hamburg build and ownership, were captured by the English in 1652 with highly valuable cargos of silver bullion.
The ships were on their way from Cadiz with bullion from the Spanish West Indies going northwards. It was disputed in the English Admiralty Court as to whether the ships were bound legally for the Spanish Netherlands, or illegally for Amsterdam. /via

The documents and files for this case are scanned and trascribed by the Marine Lives Project. They provide insights into the lives of the seamen and the trade economics of the 17th century.

The question is whether it makes sense (possible and feasable) to build a link between Hamburg as it is depicted in MarineLives and the Chronoscope Hamburg showing the year 1694.

8-Dec-2016: I declare temporary victory. 60 mariners and merchants are mapped on the Chronoscope Hamburg v1.2.

10193 pages out of 58 volumes have been scanned and transcribed.

Transcripts exported to RDF, then tranformed via XSL to be displayed as web pages. This provides a full-text search with ease.

The entire HCA Volume No.70 put into wordle – I hope wordle can cope with the amount of text. 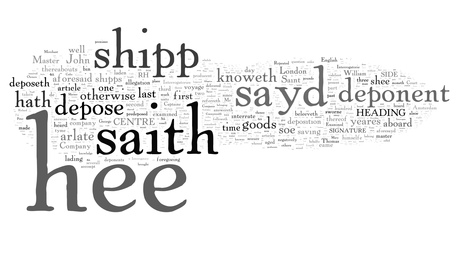 To the first he saith he comes to be a witnes in this cause by the advise and direction of Mr ffrancklin one of the Proctors of this Court. and saith he hath noe share or Interest in the sayd shipp or goods nor eyther or any of them, and was a Passenger aboard the ''Saint John'', but not of the shipps Companie, and further cannot depose. To the second he saith he can both write and read written hand, and speaketh the ordinary tongue of Hamburgh being a dialect or kind of dutch and further cannot depose, saving that he understandeth the dutch tongue. –HCA13/68 f.172r

This deponent saith and deposeth that the sayd vanTrump (sic) after he had surprized both the sayd shipps the ''Harry Bonadventure'' and the ''Saint Peter'' of the sight and observacion of this deponent struck his flagg three tymes and saluted the Towne with 5 or 7 gunnes, which thing according to the common interpretation of such actions and as this deponent beleiveth were by him done in token of his respect and thankfullness to the sayd Towne and Governors. –HCA 13/68 f.132v

To the fifth hee saith that the frigot of the said Leonard Barnet that seized him had the English flagg up when shee met him but with some difference[?s], namely shee had a redd flagg, with a crosse in the corner, only there were the picture of three towers in the middle of the redd flagge, like the towers given in the hamburgh flagg, soe that this deponent did not knowe but yet thought that hee was an Englishman, and saith the said shipp the ''Peter'' being neere the ffrench coast and making for the land neere [?Briach]. –HCA 13/70 f.49v